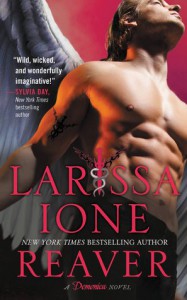 Throughout the Lords of Deliverance series, Reaver was one of my favorite characters. He always seemed to be on the side of good, fighting scary demons, and he helped to thwart the imminent apocalypse. In Reaver, we finally learn more about Reaver’s background and his earlier relationship with Verrine.

Reaver is epic and action packed. Most of our favorite and not-so-favorite characters from the Demonica series make an appearance in this book. Reaver is essentially a rescue mission, where Reaver (going against the archangels’ instructions, risks all to journey to Sheoul to rescue Harvester. (I won’t go into the why – it gets spoilery too fast – but needless to say, these two have some interesting history – *zipping lips now.* The book then becomes a fast paced escape from the many regions of Sheoul with Satan’s armies in fast pursuit. There were so many demons, each scarier and deadly than the one before. The world building is so convincing, so well done, that as you read the story, it feels as if you are there, in the middle of the action.

Of course, exacerbating the situation is the meddlesome Gethel, a former watcher who is really up to no good. Yup, really bad things could spawn from Gethel.

We get a glimpse into Reaver’s past as Yenreith, where he was not the nicest character and how he hurt the young and impressionable Verrine by just being a stupid male. Some juicy revelations follow. (Yes, you really must read this book).

As mentioned above, there are some great cameos from our favorite Horsemen. It’s nice to see a touch of Happily Ever After for some of them, although their fate is intertwined with that of Reaver’s. We even get to see our favorite demon doctor and his staff over at UGH – Underworld General Hospital.

Review posted on Badass Book Reviews. Check out the publisher's giveaway for a Kindle Fire.

Thank you to NetGalley and Grand Central Publishing for a review copy of this book.