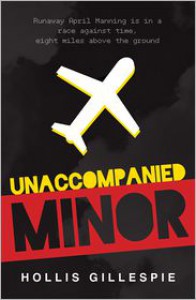 Christal and I discuss this book for the Jumble Your Genres Challenge – Young Adult on Badass Book Reviews.

"I'm just an unaccompanied minor. What do I know?"

I’m still chuckling. Unaccompanied Minor brought back memories of a previous life where I worked for an airline and enjoyed non-rev status (cheap flights, squished into the middle seat, running through airports to catch those illegal connections). This book should appeal to young adult readers, their parents, airline enthusiasts, and MacGyver fans.

Fifteen year old April Mae Manning is a third generation child of airline employees. Her grandparents worked for the airline (Granny Mae still does), her mother and late father also worked for the airline, and her step-father is a pilot for the same airline. As a result, April gets to travel non-revenue whenever there’s a seat available.

Due to the divorce of her mother and stepfather, April is forced to travel coast to coast weekly as an unaccompanied minor. April is not happy with the shared custody. After all, Ash is not her real father, nor does he make her feel welcome at his place. She has no room of her own and sleeps on the laundry room floor. He doesn’t even pick her up from the airport. April decides to take matters in her own hands and “runs away” by hanging out at airports and traveling non-rev.

April is a precocious young lady. She is street-smart, extremely resourceful, and has an eclectic repository of knowledge. I loved how April practically memorized all of the airline’s regulations (before iPads and smart phones, these were huge binders that had to be carted around by airline employees). MacGyver is her hero, and in the spirit of MacGyver, April’s skills prove to be very useful.

April surrounds herself with some very good friends. There’s Aunt Flo who is an absolute hoot. Flo is a senior flight attendant who loved to drink and smoke on duty. Aunt Flo always took care of April and allowed her to help out on flights. Malcolm was another child of divorce who traveled coast to coast weekly. Malcolm got April into the frequent flyer club lounge where she could shower, sleep, and get free drinks. I loved Officer Ned, who was on to April’s shenanigans.  I think my favorite was the quickie mart clerk LaVonda who was absolutely hilarious and quite helpful to April.

I did love April’s voice. April had a unique way of seeing the world and her observations were deadpan and hilarious.

This book probably appealed to me because of the nostalgia for those good old days when you could fly without taking a lie detector test. I’m happy that a sequel is planned and I can’t wait to see what is in the future for April.

Thank you to NetGalley and F+W/Adam’s Media for a review copy of this book.